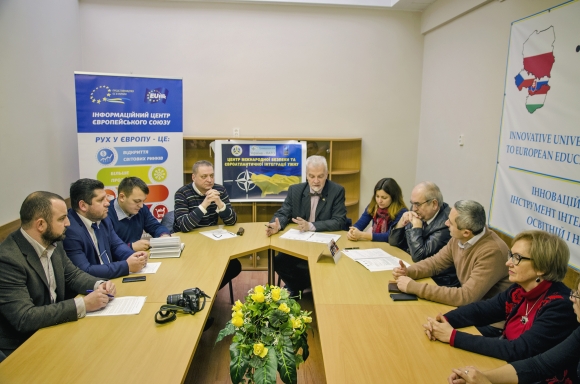 On December 21, 2016, the Information Center of the European Union in UzhNU, the Center for International Security and Euro-Atlantic Integration of Uzhhorod and the All-Ukrainian Civil Society League “Ukraine-NATO” on the eve of the Day of Ukrainian Diplomacy summed up Ukraine’s foreign policy activities in 2016 and hosted the NATO Information Day in Uzhgorod.

Regional journalists of Transcarpathia were invited to the event.

The moderator of the event was Igor Todorov, deputy chairman of the Coordination Council of the All-Ukrainian Public League “Ukraine-NATO”.

Director of the Institute for Cross-Border Cooperation, Ambassador Extraordinary and Plenipotentiary Professor Serhii Ustych took a word at the briefing. As an example of institutional support for Ukraine’s Euro-Atlantic aspirations, he described, in particular, the Program of Slovak-Ukrainian cross-border cooperation, which is being implemented within the framework of the Norwegian Financial Mechanism. S. Ustych also described the implementation of the project “Information support and implementation of innovative approaches to CBC of Slovakia and Ukraine”